Installing Debian on the Intel Galileo

Some of the guys in the Intel communities forum have done a great job of porting the Debian Linux distribution to the Intel Galileo. If you’re not familiar with the Debian, it is an open source operating system used on Linux systems. This is great news for the Galileo as it makes it very easy to port any Raspberry Pi based projects directly to the Galileo!

Debian was ported to the Galileo by StuartAnderson, who posted on the Intel Communities page.

You can find the Galileo Debian image here. Click on the “SD card image” file. This will take some time as the file is 900MB. While the disk image is downloading, we can prepare the SD card.

If your SD card has been used to write a Linux image before (used for a Raspberry Pi or Galileo Little Linux image), Windows can have trouble formatting the SD card. This is because Windows can only see the FAT32 partition and won’t see the much bigger Linux partition.

For this reason I used the SDformatter program from the SD Association, you can find ithere (Click on Windows or Mac on the left).

You can see from the picture, I’m using an 8GB SD card (7.4GB shown but it’s 8GB, it’s normal for SD cards to be about 10% smaller than the advertised disk size), in my case Windows format only saw 56MB of the disk and ignored the remaining 7.35GB! However with the SD Formater program the full 7.4GB can be seen and will be formatted. Click on the Format button to start the process. 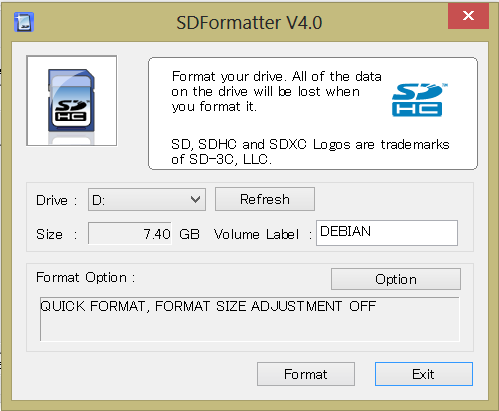 Writing the Debian Image to an SD card:

To write the Linux Debian image to the SD card you’ll need to download a disk image tool, as recommended by the original creators, I used the Rawrite32 Disk Image Tool software, foundhere. 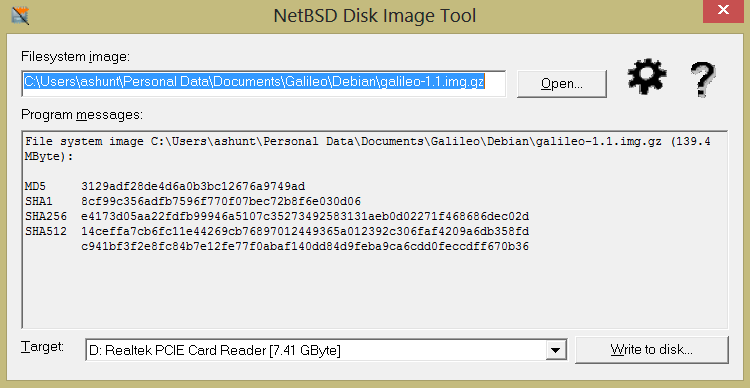 You’ll see a pretty scary warning like this, but as long as you’re sure there’s no important data on the SD card that you need, go ahead and click “Yes”!

Once the Disk Image tool has finished writing – you’ll see something like this: 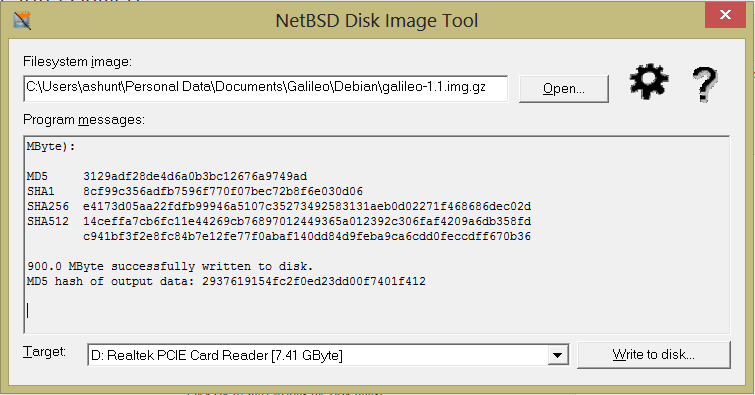 Now that we have a Debian Linux system available – this can be done from the Galileo itself!

When formatting the SD card, we could see that the 8GB SD card had a size of 7.4GB, so I’m going to expand my partition to 7.4GB just to be on the safe side.

Before resizing the filesystem.

To resize the partition, we are going to use a program called Parted. This can be used to create, resize, move and destroy disk partitions. The first command used is the resizepart command.

Select “y” to continue and then enter the size of the partition you want to create, here’s where I entered the 7.4GB (which works out as 7400MB).

When the partition has been resized we create a journal inode.

When the reboot has finished, finish by expanding the filesystem to the partition size.

The resize2fs will expand the filesystem to fill the partition, this will take about 10 minutes but when it’s finished you should see a message like this, above.

Disk size after expanding the filesystem:

Disk size after expanding the partition.

From the above image you can see, we’ve grown the filesystem to fill the partition, so we now have a total disk size of 6.8GB, with 6GB available to play with!

Now that the filesystem is expanded, it’s a good idea to update the system.

The update and upgrade will take about 10 minutes, then you can have fun playing with your new Debian computer.